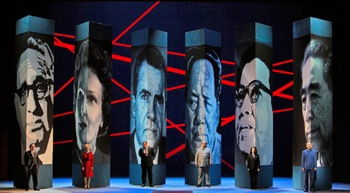 On Friday 8 June, the San Francisco Opera presented the long-awaited Bay Area debut of Nixon in China, the first opera by one of the most acclaimed contemporary composers, John Adams. After twenty-five years since its premiere, this work by Adams with a libretto by Alice Goodman remains equally controversial and popular. At the end of the performance, the warmest round of applause went to Adams himself, who joined the cast on stage. But the success of this Nixon was certainly thanks to a collective effort, as all the members of the cast and the production team showed themselves capable of great artistry.

This production was first presented in 2010 by Vancouver Opera. Directed by Michael Canavagh and with set designs by Erhard Rom, this Nixon is refreshing in its simplicity. At first, we follow the action on a screen: a video projection shows us the Air Force Once flying through a grey, cloudy sky. As the plane approaches an airfield outside Beijing, the projections give way to an actual architectural element: the silhouette of the plane is reproduced on stage, and it stands as an imposing backdrop as the American and Chinese politicians meet. The sets for the subsequent scenes – Mao's study and the banquet hall – are represented straightforwardly, as well, with hanging and moving elements (ancient scrolls, elegant tables) that confer on the space multidimensional qualities. The lighting by Christopher Maravich was also particularly ingenious and sophisticated. The projections by Sean Nieuwenhuis, showing mostly Chinese landscapes and landmarks, were effective (especially when superimposed to architectural elements of the set, instead of being projected on a background screen) if somewhat redundant at times.

For me, the only moment of confusion was the final act, which was staged as a hallucinatory space, probably in order to reflect the internal state of the protagonists that Adams's music and Goodman's libretto convey. Various elements from previous scenes occupy the space: a table and a podium from the banquet room, chairs from Mao's office. As a backdrop, there were red neon strips of light and, later on, massive revolving triangular pieces portraying close-ups the five protagonists. The characters would wander on stage recalling facts, more or less intimate, dealing with their political and personal relationships with each other. Because of the already dispersive musical and dramatic features of the scene, the sense of alienation was excessively amplified, and therefore some of the poignancy of the scene was lost. 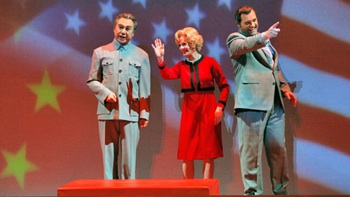 All the singers portrayed their roles with great success. Brian Mullingan's Nixon was an incredibly charismatic character: Mulligan delivered his lines with both precision and pathos. The most intimate moments – when showing diplomatic uncertainties or when dialoguing with his wife – were particularly moving. Similarly, Simon O'Neill's Mao came across as a powerful and authoritative man, despite the character's physical impairment. O'Neill's interpretation was hugely convincing, both on the vocal and on the acting side: his Mao was always staggering, almost unable to walk or to stand still; at the same time, he managed to deliver his lines with great vigour and accuracy. Both Mulligan and O'Neill were exceptionally persuasive in the moments in which their characters would directly address their audience.

Maria Kanyova also created a multidimensional Pat Nixon, highlighting both the relationship with her husband and her character's own personality. Her voice interweaving with the orchestra fabric created a wonderful harmony. Her timbre is bright and clear, and she is very much at ease in the higher tessitura. On the other hand, she became almost inaudible when singing at a lower register. Patrick Carfizzi as Henry Kissinger was a surprise: through his masterful vocal interpretation, he managed to give to life to two completely different characters – as a Nixon's secretary and as an uncanny participant to the play-within-the-play in act II.

Chen-Ye Yuan as Mao's Premier was always vigorous and accurate in his singing, while at the same time communicating some sort of existential monotony which I thought was deliberate for the portrayal of character. Mao's three secretaries, Ginger Costa-Jackson, Buffy Baggott, and Nicole Birkland, were wonderful in their rendition of Adams's score, conveying a physical and aural sense of claustrophobia and adoration around the Chairman. 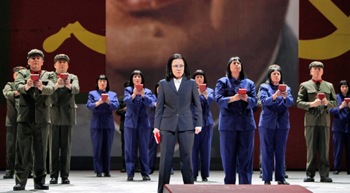 Amongst the many successful interpretations, for me – and, it was apparent, for many members of the audience – the highlight of the evening was Hye Jung Lee's performance as the ruthless Madame Mao, Chiang Ch'ing. Only twenty-seven and at her first professional engagement, Lee shone in her interpretation, both in her singing and her acting. She delivered beautiful coloratura lines, even in the most rhythmically challenging passages, with no hesitation and with fearlessness. She always remained severe in her physicality, which contributed to her character being equally intimidating and seductive. I'm looking forward to seeing this talented young singer on the most important stages in the next few years.

The chorus, representing the Chinese people, was beautifully choreographed and always in a harmonious relationship with the orchestra. Lawrence Renes led his musicians from the pit with great ability and precision, although at times some incisiveness was missing. Both orchestra and singers were amplified as the score requires, but at times the singers became inaudible during some the heaviest orchestral moments. Notwithstanding some minor imperfections, this Nixon came together as a strong production, and definitely one of the highlights of this summer's opera season at the SF Opera.